6. Keeping Up with the Changing Environment for School Marketing with Brendan Schneider

What are the trends in marketing that independent schools should be paying attention to? In this episode, Aubrey and Tara chat with Brendan Schneider, of SchneiderB Marketing and MarCom Society, about issues and trends facing marketers right now, and how to incorporate mindfulness into the hectic environment of school administration and marketing. 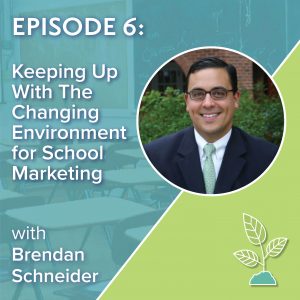 Brendan is one of the leaders in the field for teaching and knowledge about inbound marketing for schools. With his workshops, exclusive MarCom Society, the SchneiderB Media blog, his Schneider.FM podcast, his SchneiderB VirCons, and his SEO Coach software, Brendan continues to advance the abilities of the independent school admission, communication, and marketing professional.

Getting Things Done, by David Allen

Think Again: The Power of Knowing What You Don’t Know by Adam M. Grant

Sing Up For Updates via Email